I was talking with a good friend the other day who was looking for some inspiration that had to do with Henry Wadsworth Longfellow. I am familiar with the poems about Hiawatha ( who wouldn't want to go to a lake called Gitche Gumee?) but did not know much of his other work. In reading through some of his poetry I was struck by his deep connection to nature, his romantic outlook on life and sadness about the loss of "simpler" life. I also appreciated his direct references to specific plants, and feelings he experienced when in the landscape during certain periods of the year. I was truly struck by his poem "My Cathedral"

Like two cathedral towers these stately pines
Uplift their fretted summits tipped with cones;
The arch beneath them is not built with stones,
Not Art but Nature traced these lovely lines,
And carved this graceful arabesque of vines;
No organ but the wind here sighs and moans,
No sepulchre conceals a martyr's bones.
No marble bishop on his tomb reclines.
Enter! the pavement, carpeted with leaves,
Gives back a softened echo to thy tread!
Listen! the choir is singing; all the birds,
In leafy galleries beneath the eaves,
Are singing! listen, ere the sound be fled,
And learn there may be worship with out words.

Having been an avid John Muir reader and fan in my teens, a reference to nature as a cathedral was familiar to me. But, Hawthorne was doing it 50 + years before Muir! Thinking about his context, and accounts of New England being nearly deforested by the beginning of the nineteenth century, one can see why he'd be moved so. But, more than that, Longfellow was his own man, forsaking family tradition, in going to Bowdoin (my alma mater too) and not Harvard, making his own way. That applied to his beliefs - in puritan New England it must have been revolutionary to find eternity in a forest! Longfellow was also one of the first in the United States to make his way as a celebrated writer. True, there are others before him, but to me he stands out as an important figure who cleared the way for other literary geniuses of our country - Whitman, Dickinson and Hawthorne. His example of making his way as an artist is relevant today as are his deeply moving verses.

The following images are from my local cathedral. I go there often. I am looking forward to seeing even bigger trees when I head out to Oregon next week to install the plants component of "the Tarriance"  in Bend. I also included some photos of mushrooms. They've been a big inspiration lately and I think they may turn into some big paintings this fall as the rains come. 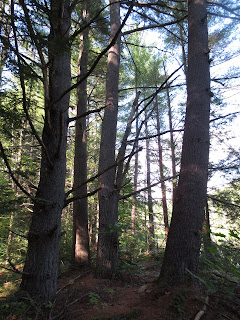 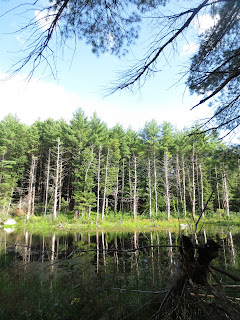 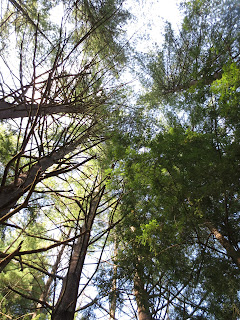 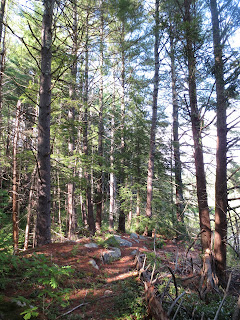 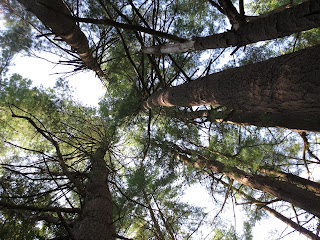 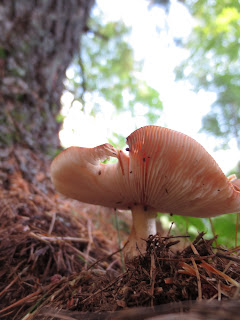 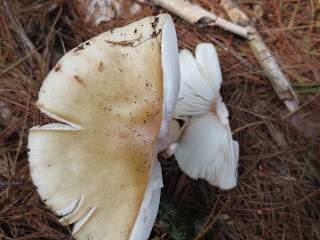 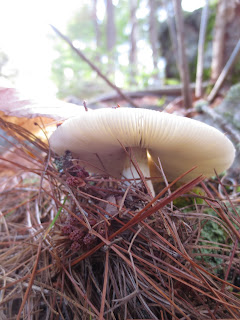 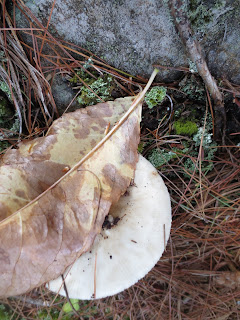 This is the first real year the terrace garden has been going. Last year was a wash with the rainy June we had combined with the just-completed nature of the project. Presently, hard edges on stone are beginning to soften, at least to my eye, and the plants are happy with having a full season of growth and the luxury of nutrient rich soils and thermal gain. As the nights get cooler and the spiciness of Autumnal winds begin to infuse the little valley where we live, I begin to reflect over the year and about definitions of productivity.

By all accounts, the garden was productive as you can see from the photos of the tomatoes below. Thus far we've had 25-30 pounds of glorious love apples. Peppers have been abundant too as have been the carrots, beets, collards and medicinal herbs.

I'd argue too that the garden has been productive in it's calling me to be "unproductive" and rest. Sitting amidst the swaying fronds of the asparagus ferns, counting butterflies on the Mexican Hyssop and combing the sea of bobbing nasturtium leaves for the zingy orange flowers to zest up salads or the mid afternoon doldrums, I become more productive and creative. Perhaps being in a garden reminds me of why I am doing what I do, getting me back to the most elemental joy of seeing complex sensory and spatial dynamics in easy harmony. 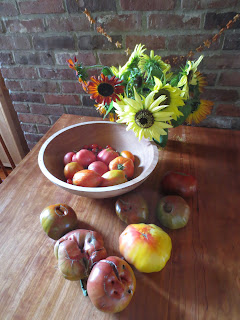 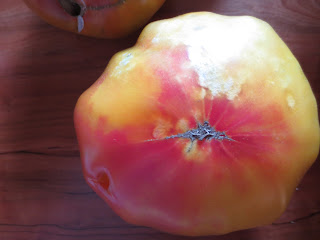 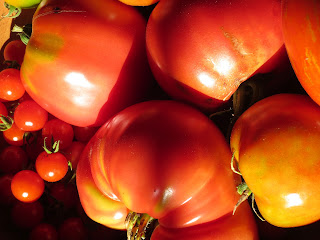 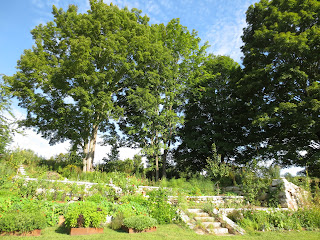 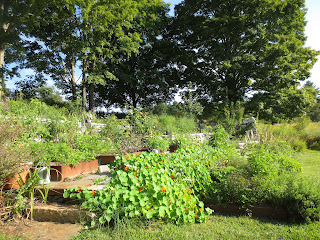 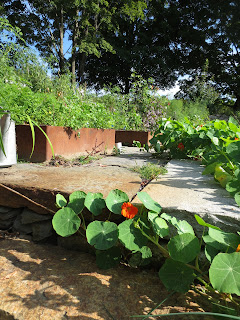 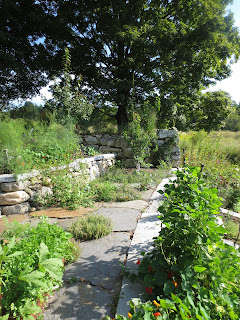 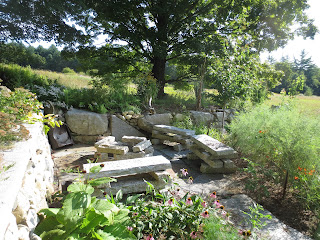 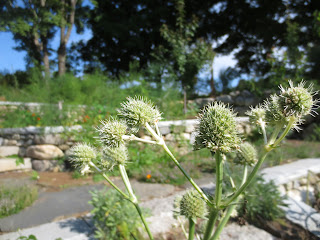 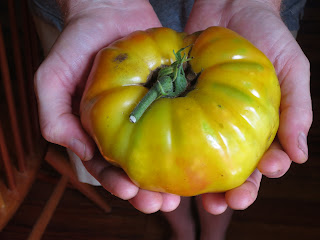 After the show at Provisions - I have more motivation to paint and make things. Ultimately it's about ensuring that all parts of my creative process are engaged. Reflecting on the great feedback I received during the show's duration ( thanks to all who went!), I had an epiphany that my art work is a critical part of my "landscape" process. That might sound blatantly obvious to some, but seeing it up on the wall made me realize that my painting is realistically and metaphorically part of the landscape work I do. All my work is about nourishment on some level - for the eyes, for the stomach, for the soul. Where before a few weeks ago, I might have told you that art, landscape and food were all in neat, separate boxes, I now believe that they're all different manifestations of the same urge I have to nourish, heal and provide a way to see connections that might not have been readily apparent but exist on their own terms in astonishingly beautiful ways. Perhaps I am realizing my own ecology of creativity.

Here are some of the projects I've started recently. One I am most thrilled about is in the barn. The ball is made of woven concord grape vine. The vine is from the cuttings of last year. Over time, I plan to add more vine from each year's cuttings - making additive sculpture that reinforces the timeliness of material -  local, seasonal art. 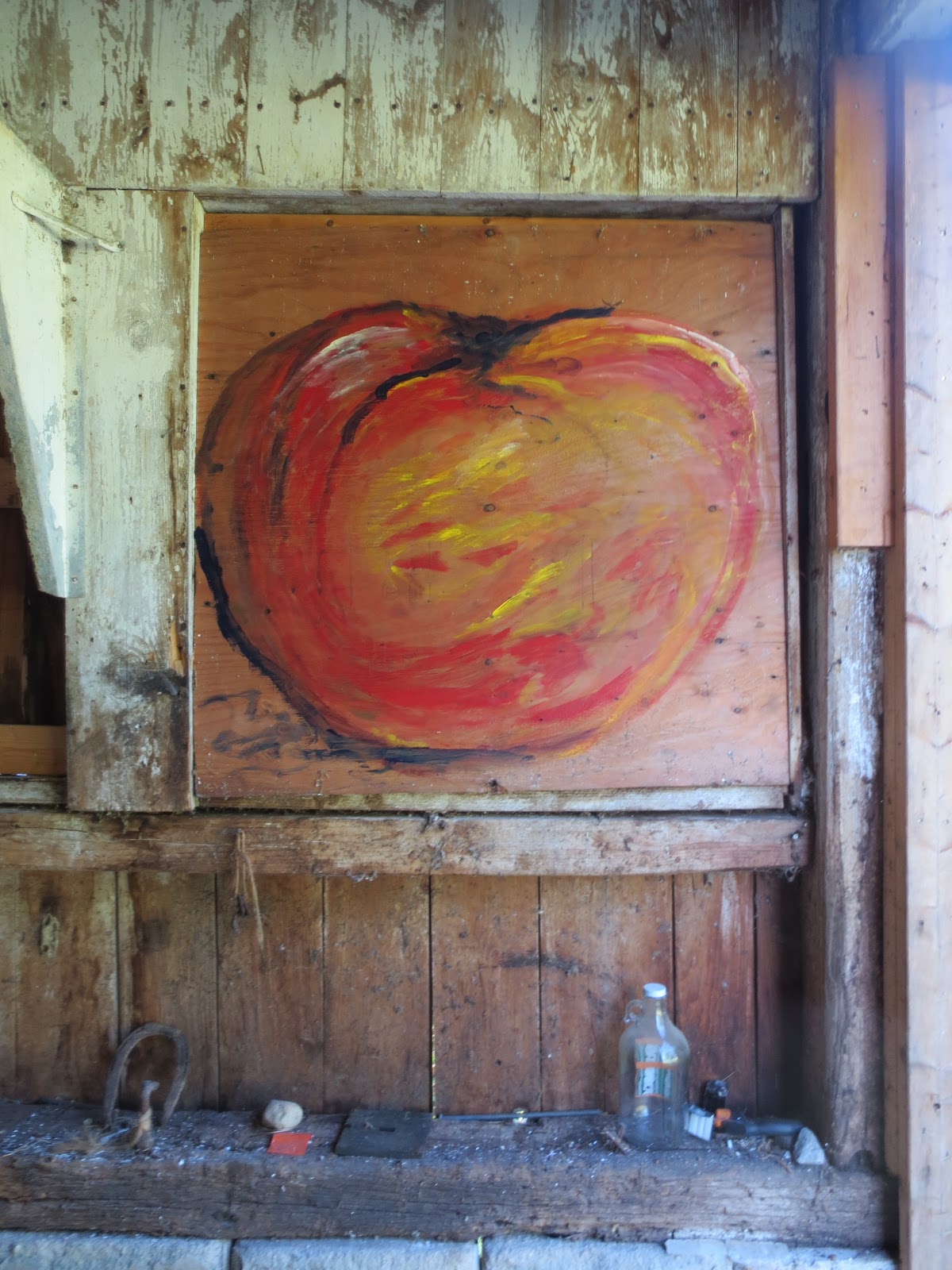 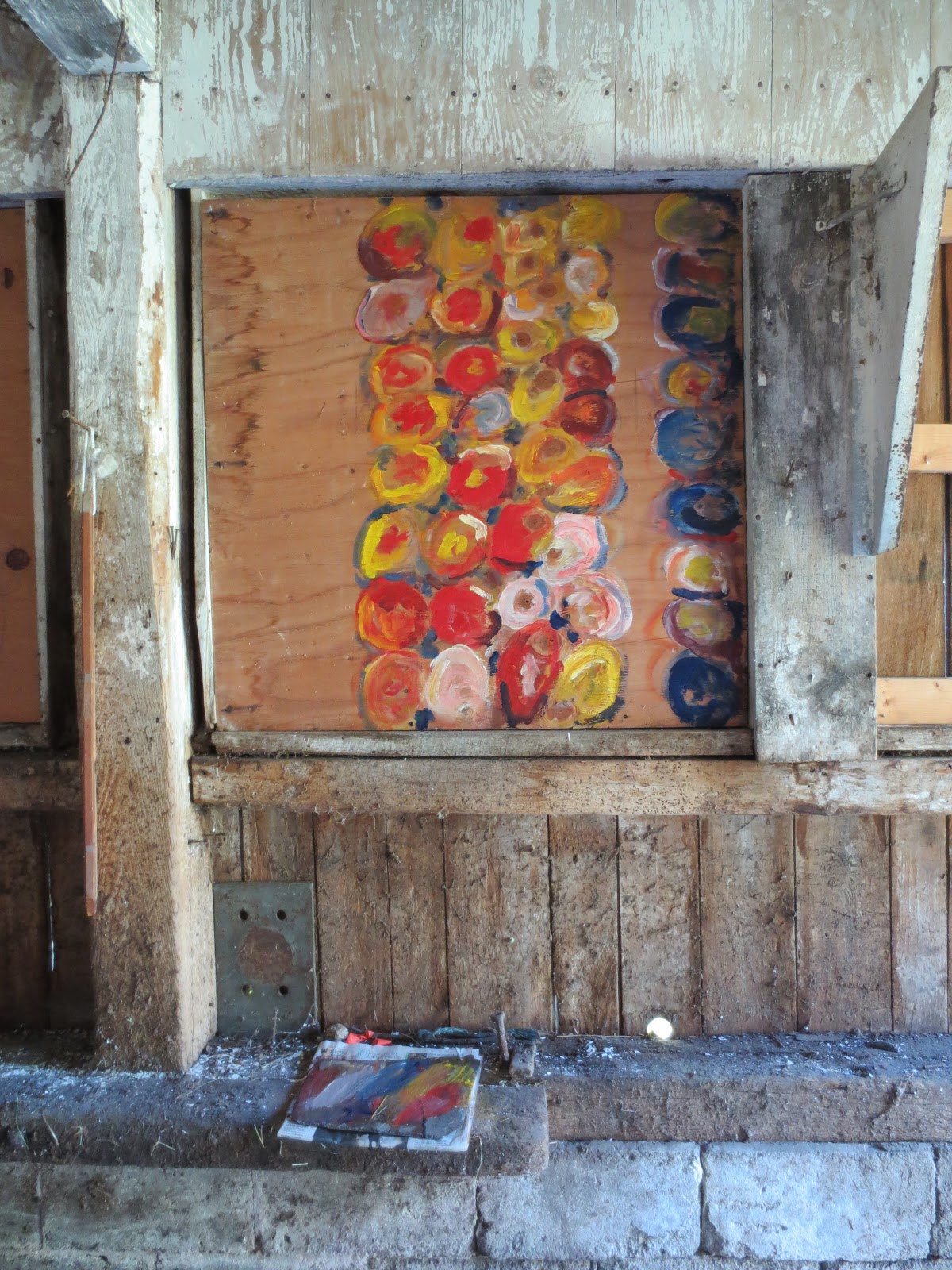 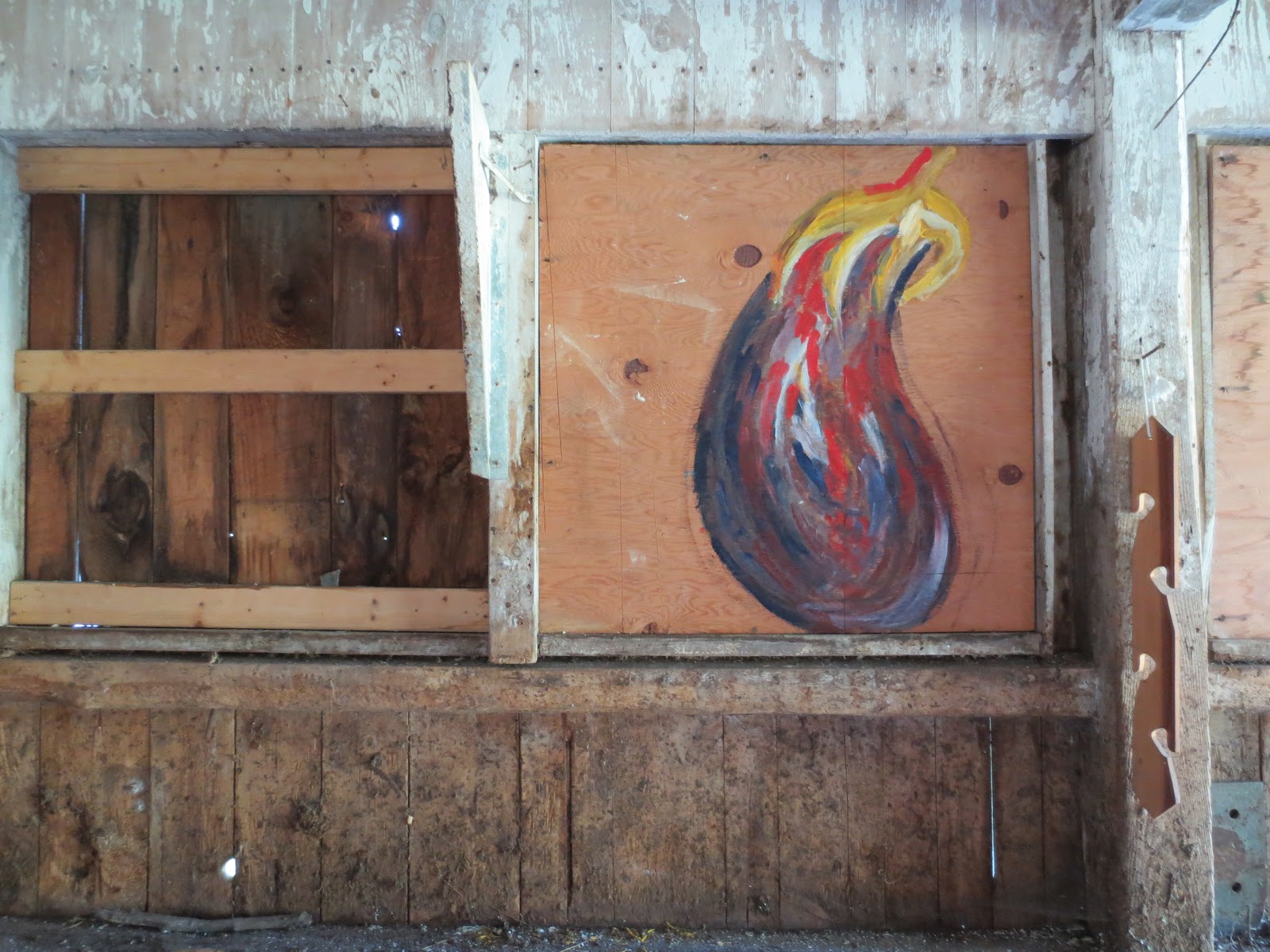 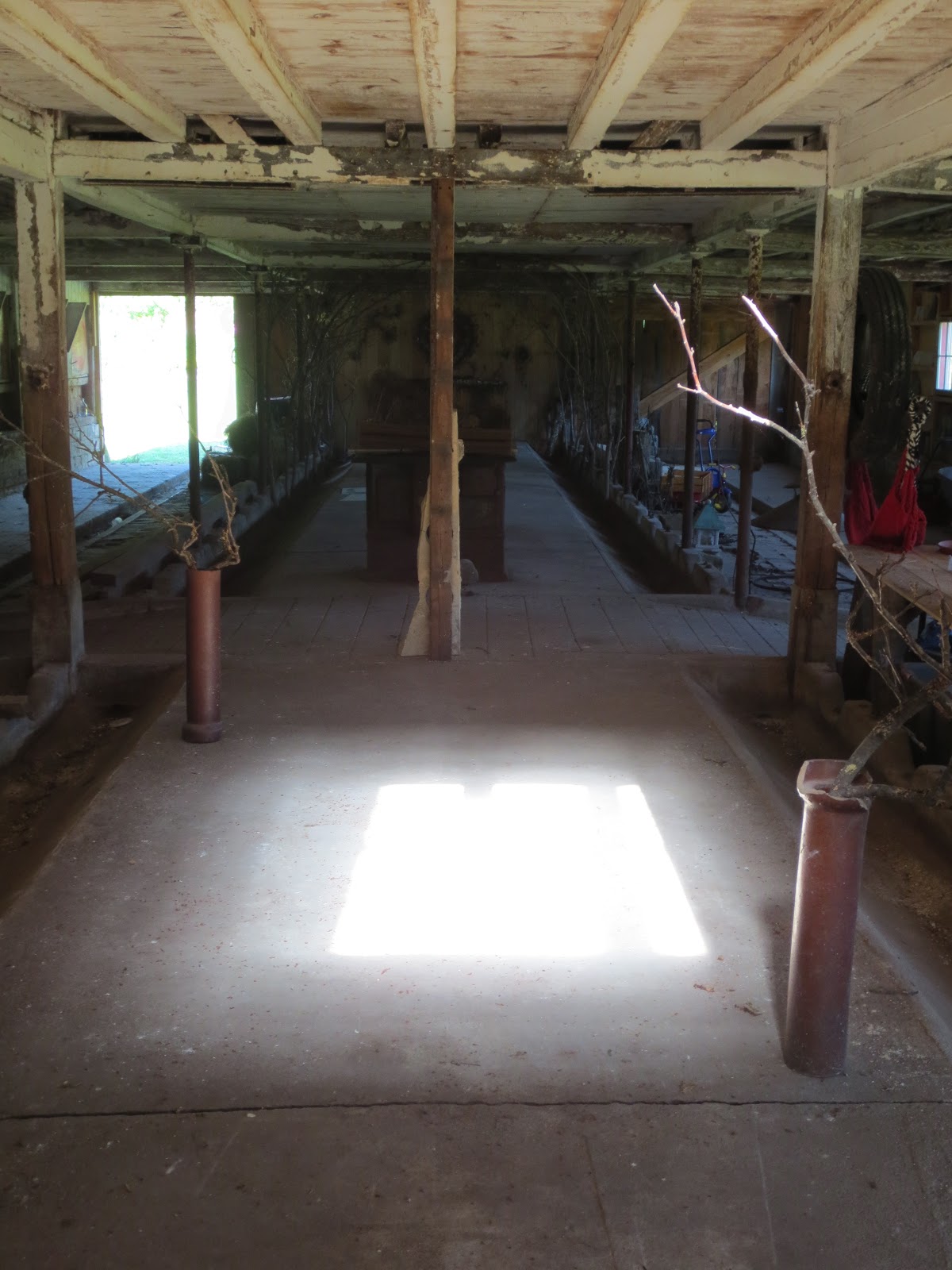 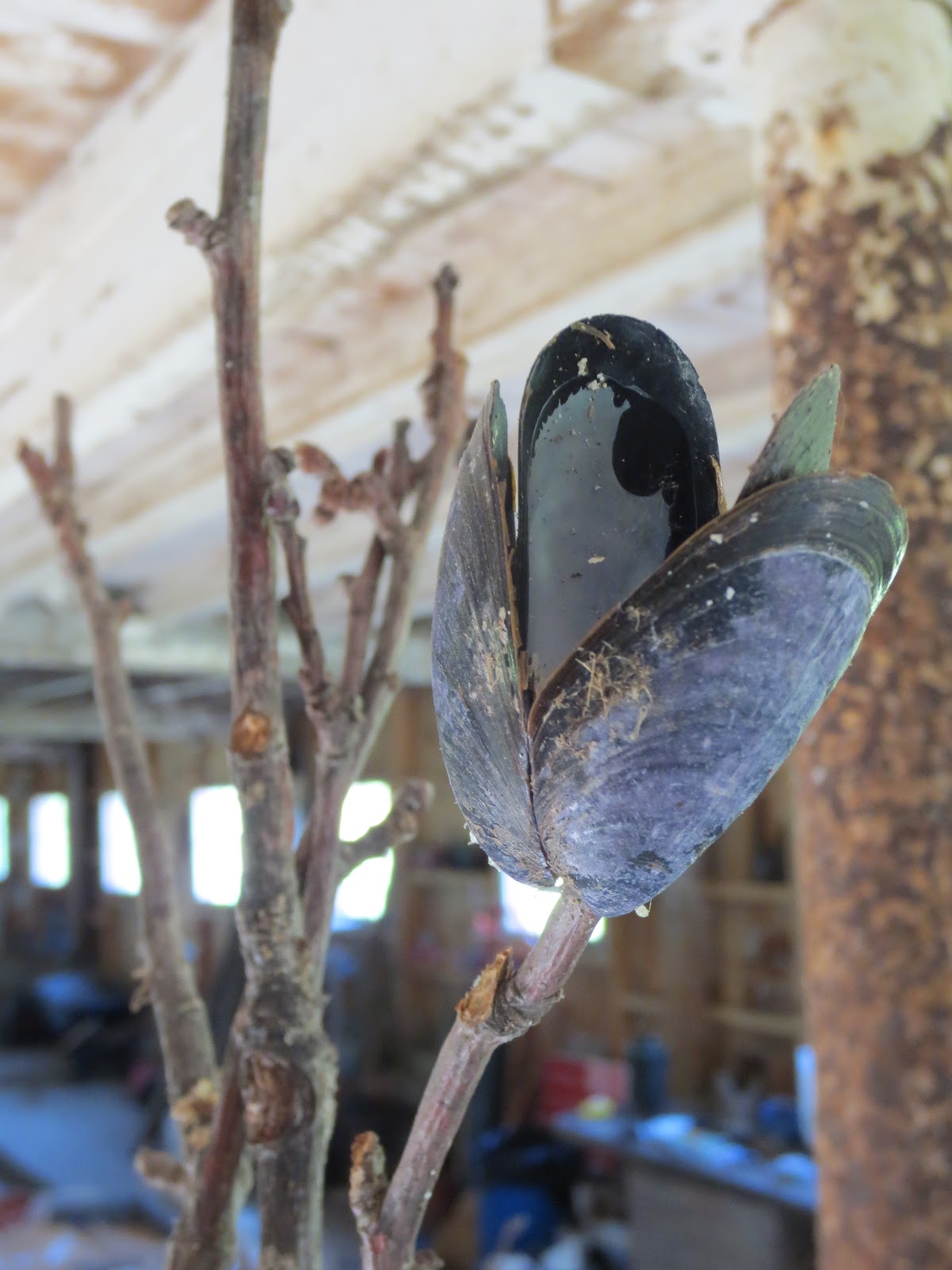 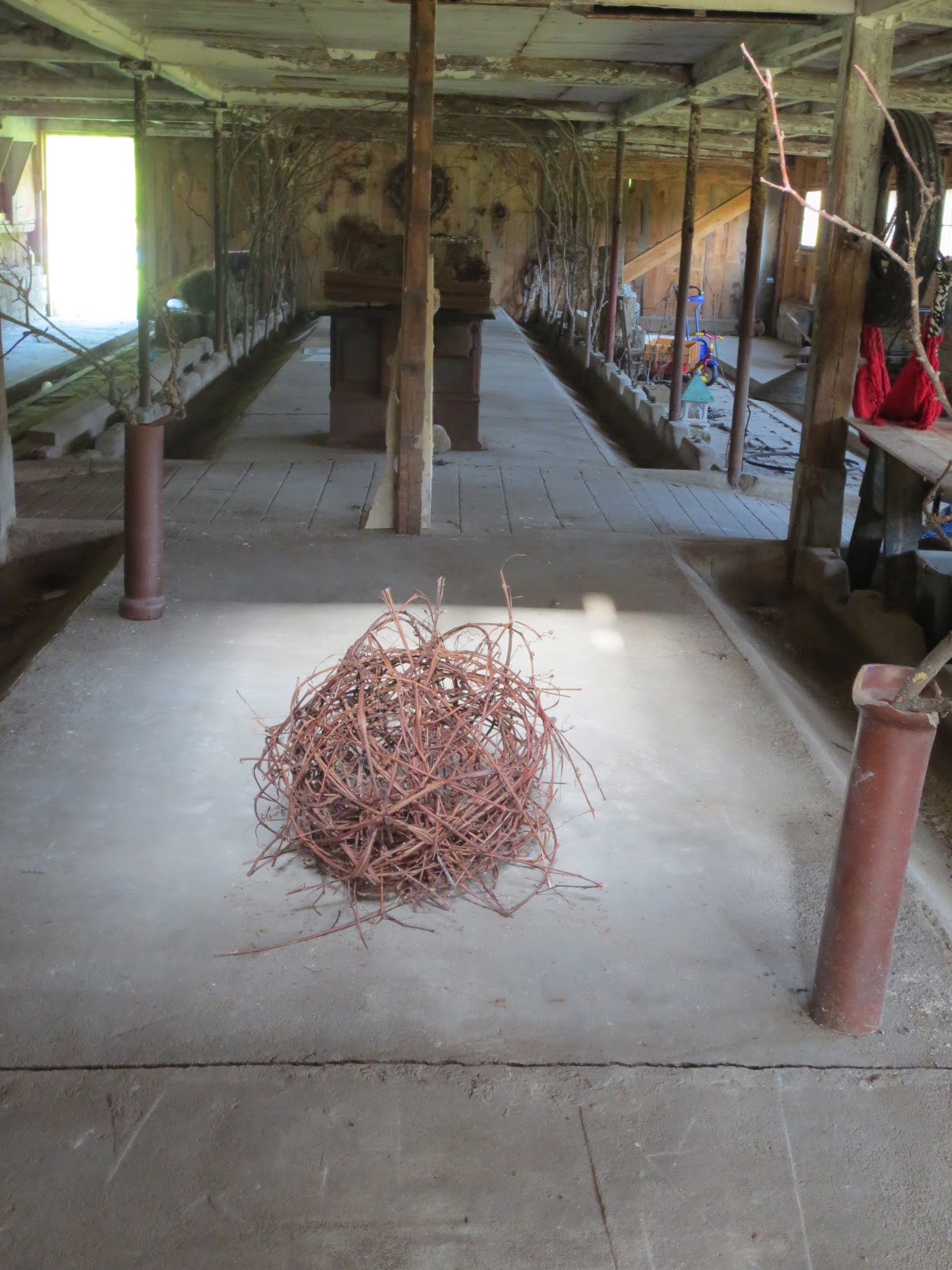 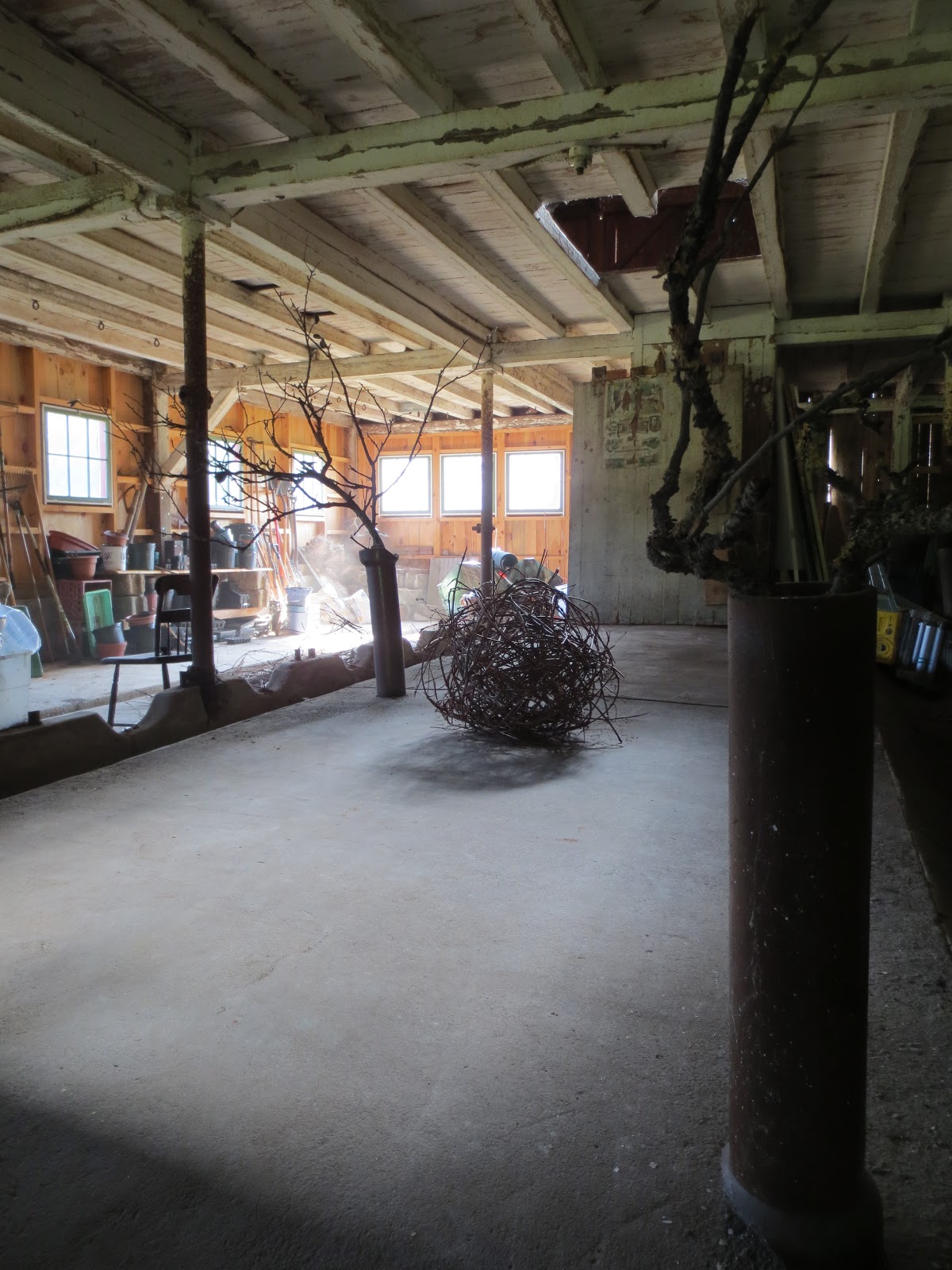 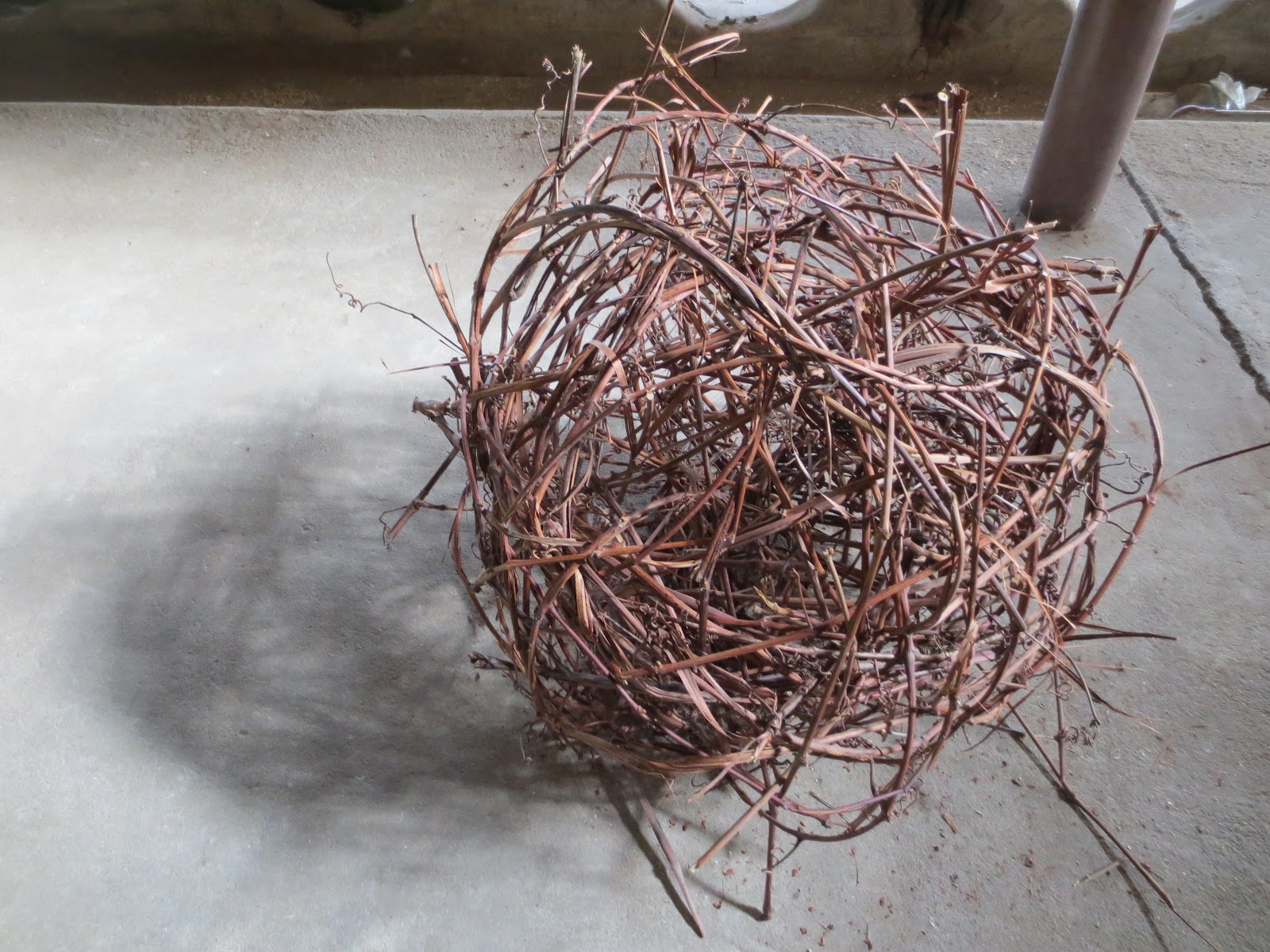 After doing more research into the eco-region of Bend, I decided that sourcing all the plants locally was the best way to ensure a successful planting. Initially I had structured the concept of the installation around the specific healing characteristics of the plants in each space and so was reluctant to vary my approach. The more I thought about it and the more I searched for specific medicinal plants like codonopsis ( a qi builder) and elecampane ( a strong digestive and upper respiratory aid) I realized that the initial idea, while good, would have required more inputs (my energy to locate plants, special attention from maintenance crews and gas to pick up plants 5 + hours away in a different growing zone) than plants sourced from local nurseries. In the process of reorganizing, I talked with some great people at Land Systems Nursery and Winter Creek Restoration  - both of which are in Bend. Rick Martinson at Winter Creek helped me select native plants with similar ethnobotanical/healing properties to the plants I was replacing. Even better than the plants I had selected initially, these plants were used for healing and nourishment in Bend by native peoples before European settlement.

Contained in this experience is a great metaphor. Embracing the reality of what is there as opposed to trying to make a situation work because it's on paper and it fit what was in my head made this process less fraught and more rewarding. I am thrilled about the way the addition of these new plants deepens the connection/meaning of the installation to the place. I am also grateful for the chance to have let go of an idea and been rewarded with meeting great people, and learning on many different levels.

One of the plants I learned about from Rick is Stanleya Pinnata - or Prince's Plume. It's in the brassica (mustard) family. Typically, it is boiled and eaten like cabbage in the spring and is very bitter - making it a good liver tonic, much like dandelion or chicory that we have here in the Northeast. The form is striking, tall spikes of yellow flowers that tower over much of the scrubby desert vegetation in the region. I am looking forward to seeing some of these in situ and getting started on the installation. It's coming up quickly!